The portfolio in Ethiopia consists of three enterprises: Zembaba Honey, GreenPath Food and Assosa Seed Union as well as one newer enterprise that is in Pre-EDP stage – Assosa Mango. Financially, half the enterprises are now profitable in terms of gross profit.

However, overall, the portfolio has recorded net losses. In some cases, enterprises have seen revenues above the cost of sales, yet high administration and operational costs have resulted in these net losses. Moving forward, the EDP team will be closely monitoring the financial performance of the enterprises, working with the finance teams, providing tools, templates and identifying areas for further investment. Despite the challenges, enterprise revenue has increased by 153%, from £209,035 to £529,623, since EDP has provided support, showing progress across the portfolio. In some cases the financial outlook for the next few years is far more positive. 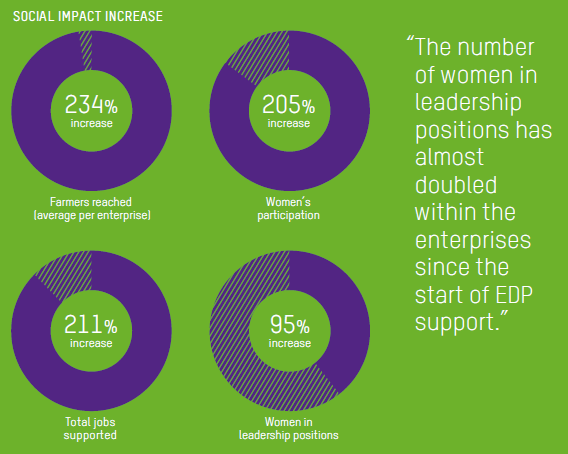 There are further barriers affecting financial performance across the portfolio. In one case, the margins from sales are not strong enough to generate gross profit, as price fluctuations are making profitability very hard to attain. Another barrier to financial success has been government regulations in Ethiopia. Oxfam and the enterprise will continue to lobby the government for more conducive policies.

In contrast to other countries’ portfolios, despite underperforming financially, EDP support in Ethiopia is resulting in much greater social impact. The enterprises have continued to increase their partnership with farmers and producers. Since the EDP’s inception in the country, over 20,000 farmers have been reached by the project. In addition, we have seen a significant increase in wages paid. Women’s participation has also increased, from 11% to 35%; and whilst not at target, the number of women in leadership positions has doubled within the enterprises since the start of EDP support.