The Honduras portfolio contains three enterprises, two of which are relatively new – Crepaimasul Cashew and Apis Lilian Honey – as well as an existing enterprise from the first phase of EDP, Aproalce Vegetables. There is a clear distinction between the performance of the two newer enterprises and the existing one. The two enterprises that have been onboarded in the second phase of EDP are performing well and continue to be profitable, recording growth in net profit for the financial year, and are continuing to progress as projected financially.

By contrast, after consecutive years of making a loss and a lack of transparency over financials and operational status, the team in Honduras has recommended that we exit the enterprise Aproalce Vegetables. A decision will be made in 2019. Whilst disappointing for the portfolio, it is a good example of how Oxfam’s onboarding process and due diligence has improved, evidenced by the success of the newer enterprises and speaking to a more stringent selection process. 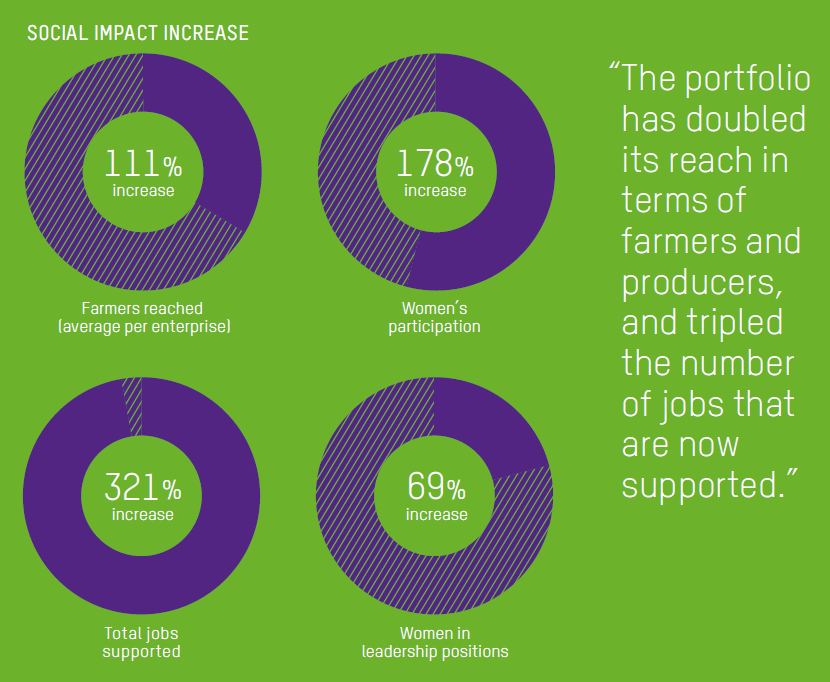 Equally positive is the social impact that is being created by the support of EDP across Honduras. The portfolio has doubled its reach in terms of farmers and producers and tripled the number of jobs that are now supported. Women’s participation has significantly increased, from 18% to 49%, and there has been a small increase in the number of women now holding leadership positions. In one particular instance an enterprise that had no women within its leadership team now has a 50% split. In addition, there have been various training sessions for capacity building across the country which are particularly aimed at women. This training aims to help them to increase theirincome and improve their livelihoods.
Across the portfolio, the enterprises have faced various challenges. One example has been seen with the Apis Lilian enterprise, where women have shown low levels of self-esteem and feel that there is a macho culture within beekeeping activities. This is creating a barrier for them to participate within the enterprise. Political instability and an unpredictable climate are risks to both the financial and social impact of the portfolio. The EDP is working with the enterprises to try to mitigate these risks moving forward.