The EDP portfolio in Rwanda consists of four enterprises: one from the phase one of EDP and three from the second. Shekina Cassava Leaves (EDP 1) and the Tuzamurane Pineapple Cooperative have been receiving support from EDP since 2014 and 2015 respectively. The two newer enterprises were both taken on in 2017; they are MFPI, which specialises in soy, and Kigali Farms, operating in the mushroom market. Investment in Kigali Farms was approved in December 2018. 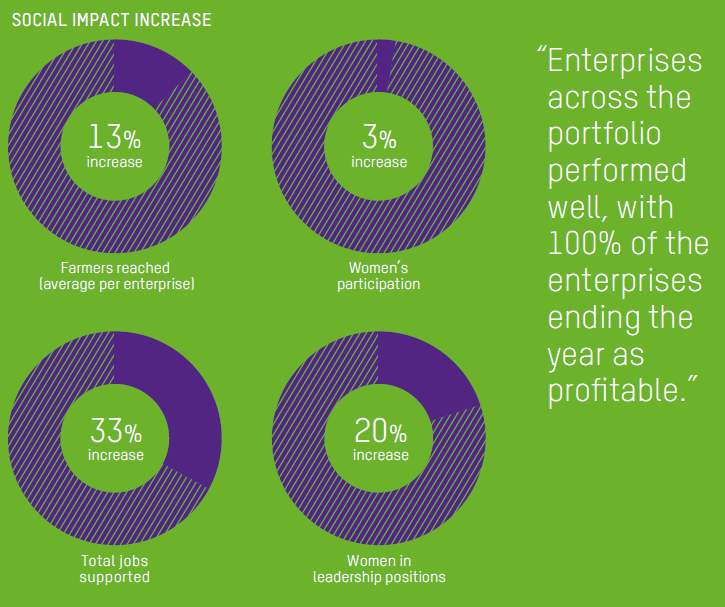 The fourth enterprise, Kigali Mushrooms, is in Pre-EDP stage and will receive significant investment in 2019. Despite showing strong figures across the portfolio, the year was not without financial challenges. In some instances, enterprises have seen some profit decrease from last year due to an increased price offer to farmers and unfavourable climate conditions. Other risks have been identified by the team, such as those faced by Tuzamurane, which is reliant on one customer for dried organic pineapple. MFPI Soy faces the risk of a shortage of raw materials, due to the number of other companies who are also using soybeans, which is the major raw material for the enterprise. Local harvests are struggling to meet the region’s demand. As well as the promising financial performance, the EDP team continues to see positive social impact as a result of the programme. Across the country, the number of farmers reached has doubled. Wages have continued to increase and are now nearly 70% higher than before EDP support. The number of jobs supported has tripled across the portfolio, from 60 to 190, with 15% more women taking up leadership positions and more than half of the leadership positions (53) now held by women. Female participation has not seen much of an increase on a wider scale, with only a 3% increase witnessed throughout the portfolio, although this can be attributed to already high levels of women’s participation before EDP. The EDP team is working with enterprises to improve this figure; in one example, the Tuzamurane  cooperative has introduced incentives women to join the cooperative as members.